This Bernie Bro is Ready for Hillary 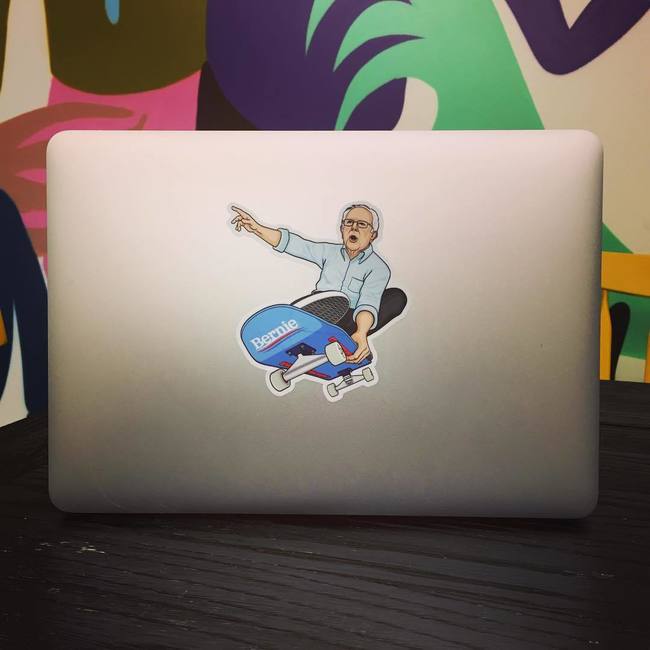 (This is my laptop. Anybody got a Hillary sticker for me?)

Tomorrow is my state’s primary. In California, Bernie Sanders – the candidate I’ve been supporting this election, the one I’ve donated money to, one of my favorite public servants ever – has a real chance to win. It would give his campaign a final, potent boost leading into the convention, where he plans to use the democratic party’s byzantine rules and processes to wrangle the delegates necessary for the nomination. This is his last big moment.

And I’m going to vote for Hillary Clinton instead of him. I want her to win; I want him to lose. And I want all of my Bernie Bros (and sisters) reading this to consider doing the same.

Here are the three reasons why:

1. Hillary Clinton’s nomination best reflects the will of the people #

Even though the wackadoodle parliamentary rules of the party allow for a theoretical path for Bernie to win, it would be undemocratic, and plays to the notion of the primary being “rigged” as much anything the Sanders camp has complained about.

2. Hillary is the more viable candidate #

My fellow Bernie supporters like to point out his superior polling numbers against Trump, but I think it’s obvious that they won’t last. The GOP and the massive super PACs orbiting around it have left Bernie Sanders completely untouched for a reason: he’s one more voice speaking out against their true opponent. One more divisive force in the democratic party. At the moment, he’s a tacit ally.

This would all change the instant he got the nomination, and I honestly don’t know what would happen. He really hasn’t been tested on the national stage at that level before.

But Hillary has for decades. Her record has been scrutinized for decades. She’s had to answer both substantive and dumb, inflammatory questions for decades. I have no doubt she can handle it.

Mike Tyson said that “Everyone has a plan ‘till they get punched in the mouth.” I don’t want to gamble on whether Bernie can handle this fight when so much is at stake.

One of the most exciting things about Bernie Sanders’s candidacy is how powerfully he brought the issue of economic equality into the national conversation. His popularity is no accident – he’s tapping into the most broadly felt and crucial issue facing our country. And his rejection of lobbyists and big money lend an unprecedented credibility to his platform.

I wish this election could be about economic equality, or whether single payer health care is better than Obamacare. But it’s not anymore.

The force of Donald Trump’s personality, and the weak and woefully misguided GOP coalescing around him have reset the agenda of this election.

The election is now a referendum on racism, nativism, and maintaining the most basic vestige of governance and accountability. A Trump presidency would be a catastrophe to working people, immigrants, the environment, and social justice. In that light, the policy distinctions between Hillary and Bernie are totally irrelevant.

My Bernie brethren, if you care about our country – and our world, really –you’ve gotta support the Democratic nominee, whomever she may be. Let’s make this simpler for everyone and start the party unification tomorrow.

My friend Julia works for the George Lucas Education Foundation and every now and then, she invites me to one of the mind blowing events that happen regularly at Skywalker Ranch. This one was a sneak preview of Michael Moore’s newest... Continue →