I drove some cars one day. 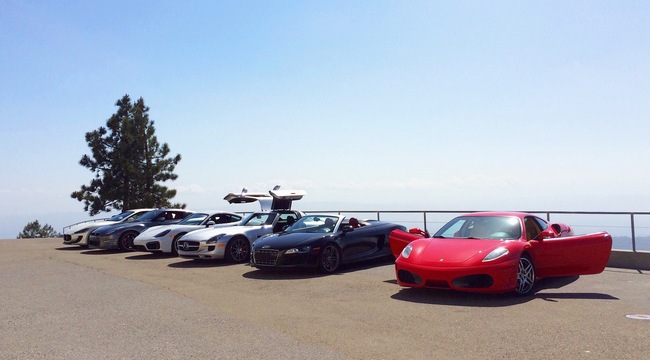 Yesterday my girlfriend got me a present. For the price of a booked-kinda-at-the-last-minute flight to New York, you can drive a million dollars worth of supercar at this place called Club Sportiva in San Jose. It’s a pretty good deal.

Before I give you my impressions, I’d like to point out up front that the VW GTI is a phenomenal car. Good power, handles well, luxurious inside, and beautiful. Most of the cars I drove are completely superlative in every way, but only a couple are meaningfully better than a GTI. There’s only so much fun you can have in a car, and only so many things you can do with leather and plastic to make it feel special inside.

And the GTI crushes this. It makes a great $30K baseline to compare these $100K+ cars. So let’s count down these cars. Worst to best.

This was exactly what I expected, which is shitty. It’s big and wallowy, and the steering is slow, making it very hard to place on the road. It doesn’t want to dance, even in “sport”. It looks like a character from Jersey Shore. The worst thing though: The gas and the brake are REALLY HARD TO TELL APART. Go google the pedal box. It’s baffling. After a couple of turns, I switched this car to comfort/auto, and just tootled along for the rest of the stint.

On the plus side, it does have a viagra dispenser in the center console, which is convenient.

Better than a GTI: Hell no.

It has GULLWING DOORS! I mean, come on. It’s probably the most beautiful inside, with forged aluminum shifter paddles that are cold to the touch, and a matching finish on the instrument cluster. Classy.

I drove it on a tight, super technical section of road, which was like riding a tiger through a Gymboree because of INSANE, UNGODLY TORQUE. I could not get the accelerator pedal to touch the floor for one instant. It was obscene. All the while, the V8 loudly, but gently purring. It never sounded riled, even high on the rev range.

With all that power, it’s a GT at heart. The ride is soft, the steering is light and numb, and it’s giant proportions make it tough to place. So you kind of aim it at a straightaway, and fire it like a missile.

Better than a GTI: More of an occasion for sure, but not much better, no.

It’s big and boxy inside and out. When hustling this thing around the mountain, it felt like I was driving the world’s fastest Tacoma. On the first turn (perched over a cliff), I chirp-chirp-chirp understeered for a few feet before it tucked in. It doesn’t like to be flicked around. The flywheel must be really heavy because it revs surprisingly slowly. The paddle gear changes happen slowly too.

But holy fuck, the power. It whooshes through the rev range like an avalanche, and when you drive it right, the grip is just insane. You can feel all four wheels mechanically clawing at the road. The sensation is like having tires made of velcro.

This car is zero percent refined, but it is truly a power tool for speed. And one of the three true sports cars here.

Better than a GTI: So much less refined, so much faster. You decide.

This was the only car here with three pedals (and an old school Ferrari-style gated shifter). The V10 roar is glorious. The steering is precise and has good feel for a modern car. The grip is stellar. It’s tossable and confidence inspiring. It reminded me a lot of my Porsche 911, but with a little more power, and a little less feel. I think it’s just gorgeous too, especially the spider.

Not much negative to say. At one point, Carmen accidentally pushed a button on the dash and the touchscreen popped up a message that said: INSERT NAVIGATION MEDIUM. So at least you know it’s German.

This car is extremely lovable, though it’s just slightly more of a GT than a true sports car, but still so wonderful all around.

Better than a GTI: Honestly, REALLY SIMILAR. Just more of everything.

This is the cheapest car here, but it’s one of the best. The Cayman is like a super-Miata. And I was flogging this car hard. I would plant my foot with ape like precision at the apex of a hairpin, and make the whole thing rotate around the corner like a tank. It’s so easy to trust. So fast and capable. So crisp. It’s epic.

One sticking point: The steering. It’s fast, heavy, and perfectly weighted. Not great feel though. Just ever so slightly remote. That’s not enough to detract from the 7,000 barrels of fun that is this car.

Better than a GTI: Yes. Completely. On another level.

Here it is. The grand finale. Before this day, I’ve never even sat in a Ferrari, so I wasn’t sure what to expect. But when you slide down into your chair and stare down the prancing horse on the steering wheel, and then glance in your rear view mirror and see testarossa cylinder heads peeking through the glass, you are home.

Manettino to “SPORT”. Push red start button. BURRRRrrrrrrrrrr. Sounds different from any other V8 on earth. Not burbly – high strung, but loud. Like a terrier with a megaphone.

This is when the instructor leans in and tells me, “It looks like an auto, but you have to drive it like a manual. This also means you have to hold the throttle steady when it’s letting out the clutch or it will stall.” Seems ancient in a world of PDKs.

Then the instructor hopped into his BMW 1.35 and tore ass down the mountain. I gave him a little lead and set out after him. This is when my whole life changed.

The steering, which felt heavy in the parking lot turned wickedly, absurdly light. But the feels! Every imperfection in the road manifests itself as little vibrations in your fingertips, and gentle tugs at the wheel. The wheel is alive in your hands. But again, it’s super light, so you don’t fight with it, you dance with it.

The car goes EXACTLY where you point it – instantly – and it feeds in power EXACTLY as you ask for it, so I was looser in this car than any of the others, which my superego did not appreciate. A couple of times, it was clear that the traction control was reigning me in. Now I know why all those d-bags wreck their Ferraris on youtube. Glad I heeded the instructor’s advice not to put it in RACE.

Mix this totally enthralling driving experience with a 500 horsepower octet screaming behind your ears, and it’s complete sensory overload. I had a smirk on my face driving the other cars, but in this car, my face melted into The Scream – terrified and awestuck, but compelled to drive harder, and faster.

I drove the shit out of this car. Sometimes the bottom would scrape on the road. Sometimes I would ring out the throttle and look at the barely readable speedo, with complete disbelief.

I’ve driven a lot of cars in my life, and most of the good ones feel more or less like a GTI. Then there are pure sports cars, like the Miata. These are my favorite. And most of them – at their very best – feel like super Miatas. Including my 911.

The Ferrari is a third category. The first and only I’ve ever experienced in this category. It’s the dream where you’re flying.

Better than a GTI: Yes.

I bought a 1969 Porsche 911 less than two months ago. Here are a few things that have gone wrong:

The front calipers were stuck with corroded pistons. Replaced pistons, resurfaced calipers and resealed. It seeps oil between the two halves of the crankcase. Not really fixable without a $15,000+ rebuild. Living with it. The oil filler... Continue →