Disclaimer: I have a couple of friends working on the Apple Watch. They don’t tell me anything, and I’m smart enough not to ask. This is my speculation.

Lots of people are talking about the prospect that the Apple Watch costs fancy watch prices, upwards of $10,000, and how that makes no sense for consumer electronics, which improve (and go obsolete) to the drumbeat of Moore’s law. So perhaps the watch will upgradable.

I think this is true. And I’d like to offer an idea to support it: Unlike phones, tablets, or computers, the Apple Watch is already at the ideal size. Or put another way, unlike those other devices, the size of the Apple Watch is entirely dictated by ergonomics, and not technology.

First, the screen size: It’s mostly dictated by the size of the human wrist, and cultural customs around watch sizes. I think Apple’s two choices of watch size balance the needs of screen size vs. wrist size, for large and small wrists. The limiting factor here is the human body, not technology.

But surely the thickness of the watch must be a constraint of technology! Apple products always get thinner. Well, I don’t think this one will. Here’s why: 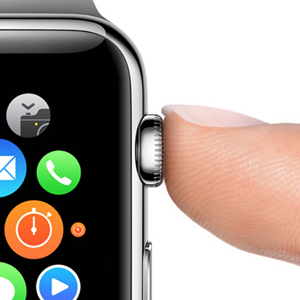 The digital crown. I think the digital crown has to be as big as it is to be ergonomic as you spin it with your fingers. Traditional watches have smaller crowns, but they’re not meant to be used several times a day, so they can get away with being smaller. Not this one, though.

And for the crown to be a big as it is, the watch needs to be as thick as it is. I don’t think this is going to change.

And if it doesn’t change Apple has the chance at an unprecedentedly profitable replacement cycle: Customers buying a super expensive, high margin product one year, and then replacing the guts (perhaps at an even higher margin) every year.

By making the product upgradable, Apple could be unleashing a bigger business than anybody realizes.

My friend Julia works for the George Lucas Education Foundation and every now and then, she invites me to one of the mind blowing events that happen regularly at Skywalker Ranch. This one was a sneak preview of Michael Moore’s newest... Continue →